Moving on to May

Well after a couple of false starts in April I think we can finally safely say that spring is in the air!  My first gig of April happened in the midst of a snowy frigid day that hearkened back the the last time we played at the Kline's House Party back in January!  Reprising the role of "The Replacements," five musicians - Biddy Nye, Sam Giannetti, Marcy Brown, Jeff Wiley, and myself - put together a nice variety of music to entertain the crowd.  Everyone on the stage took the lead at one point in the evening or another, making for a wide musical palette that kept the crowd clamoring for more.  Big thanks also to Greg and Goose for jumping in on washtub bass and harmonica respectively. Thanks also to Larry Franklin for sharing his photos with us!  Check out his shots here.

'The Replacements' rock the Kline's

Next up was a return to The Commonwealth, a really cool little burrito bar in New Castle.  If you haven't checked this place out get on up there!  Mat and Ollie will treat you well, and you'll leave stuffed!  With summer coming, the back covered deck by the river will be open and I'm pretty sure my next time there I'll be playing outside.  I'll keep you posted for my next booking there on my schedule. 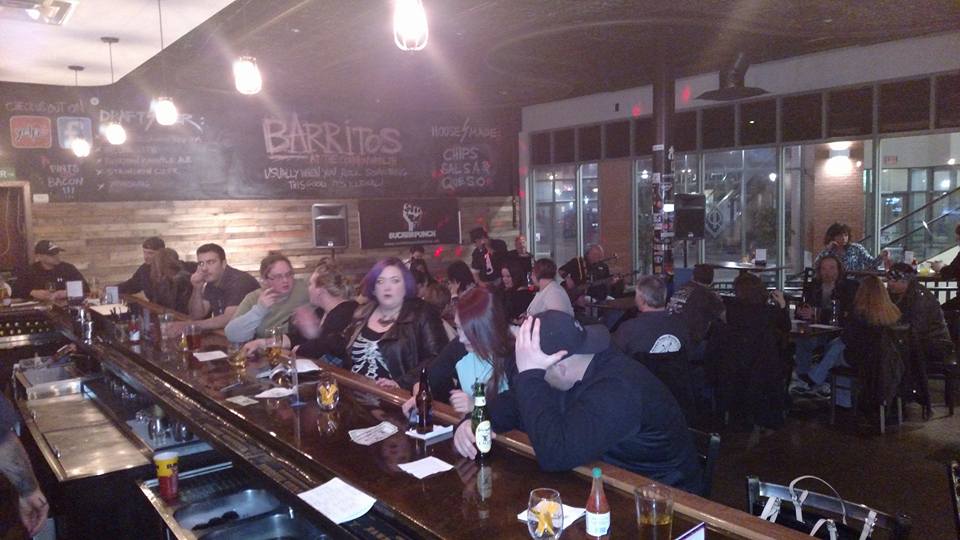 After a relatively slow first half of the month, things really heated up on the back half.  Monday saw a relatively small open mic performance for me, but a noteworthy night of Pittsburgh local talent at the new upstairs Funhouse at Mr Smalls (seriously, go check this place out) as they had a kickoff party for the Acousticafe Open Mic's move from Club Cafe to it's new home in Millvale.  What a great space!  Looking forward to seeing what happens there. 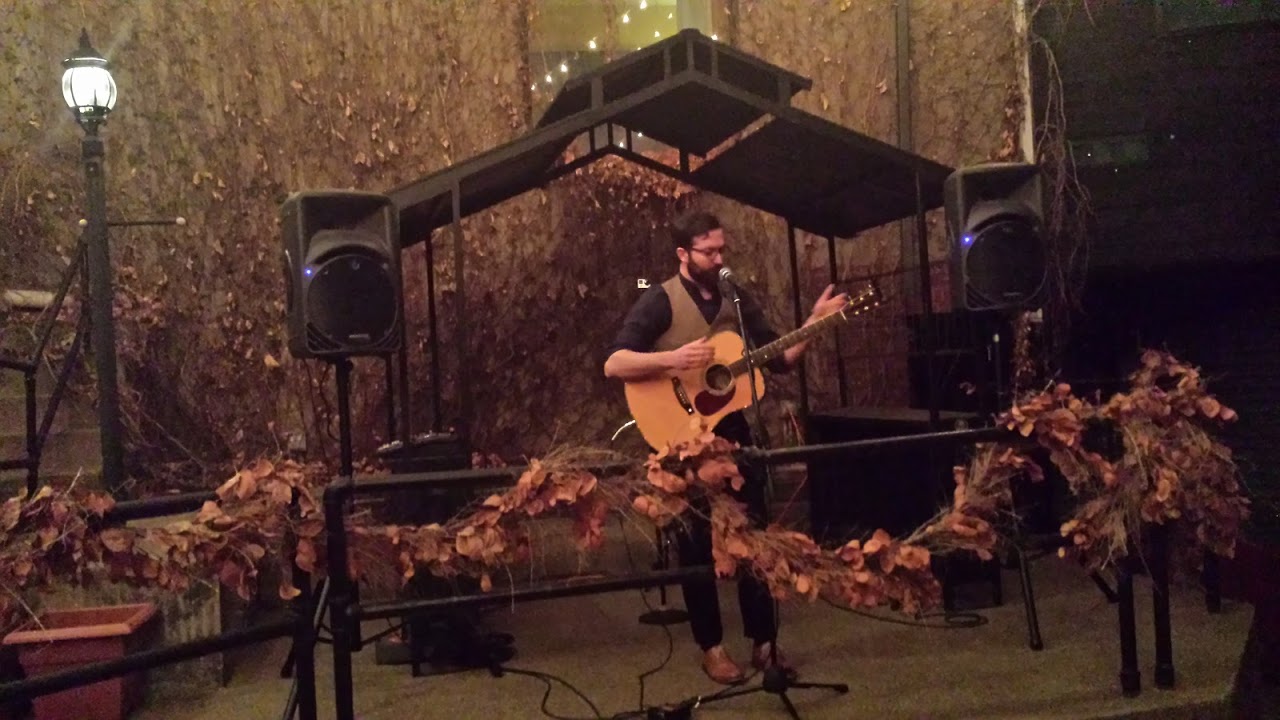 Two days later, on Wednesday 4/20, I got to play for the first time at the very cool Reclamation Brewing on main street in Butler, followed the next night by a gig at Bar Louie North Shore with my occasional fill-in spot in the band Right Turn Clyde. 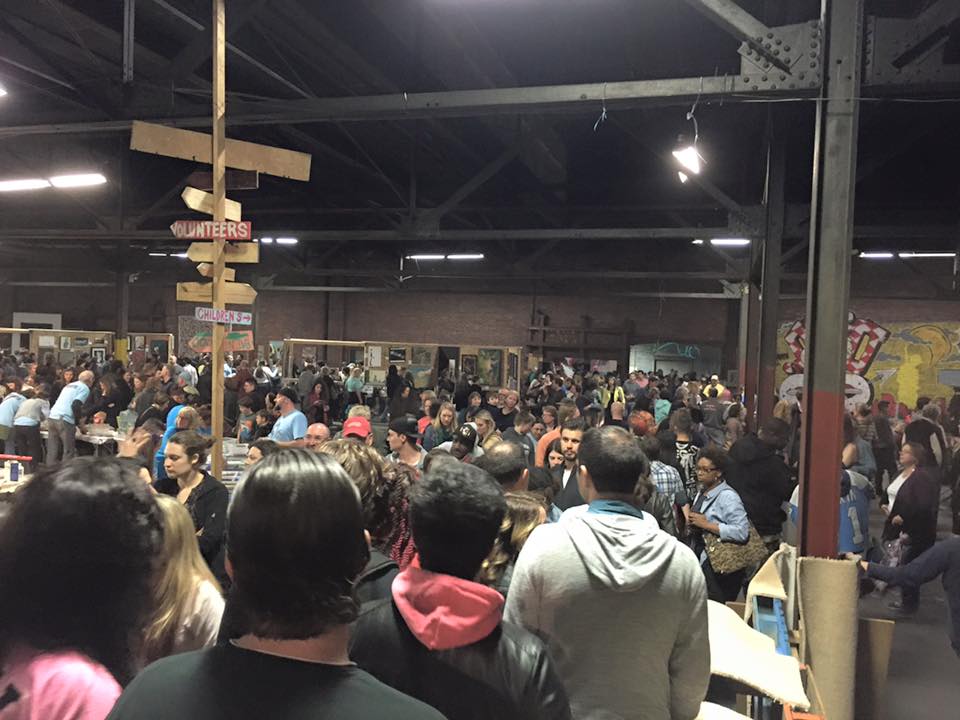 Art All Night. This pic doesn't even BEGIN to capture the size of this thing.

Now, Saturday took a bit of a turn.  First I had a nice little afternoon set at the Art All Night event in Lawrenceville, a gigantic 24-hour-straight art exhibition/event.  Later that night I was originally scheduled to play at Pizza Roma in Sewickley, but the Penguins playoffs superseded my gig, so I'll have to try to come back there for a future date.

Instead, I headed up to Fisher's Bar in Zelienople, and joined Dave Hamilton for our first gig as a duo in the Brother From Another Mother collective!  Dave and I have been jamming together for the past several weeks and we've decided to take our improvisational energy out into the world.  I also jumped in with him at the Glass Gone Wow event on Sunday afternoon and we had a great jam.  Keep an eye out for future developments as Dave and I assemble a full band and start gigging together in the future!


Now for some May dates (full details also in the Shows page) :

Sunday 5/1: Running sound and performing, along with other members of the Pittsburgh Songwriters Circle, along the route for the Pittsburgh Marathon.  If you're running in it this year look for us around mile 18!

Saturday 5/8:  Raggoo Festivoo!  Annual two day camping/music/dancing/party/good time, up at beautiful Rock Falls Park in Slippery Rock.  Two day tickets are $30, Saturday only is $20.  Now I'm only playing a short set, so don't come just on my account, but check out the lineup, there are tons of great acts, ready to kick off the festival season!

Friday 5/13: My first run at The Beerhead Bar (formerly The Beer market) on the North Shore.  If you are a craft beer fan, you've got to check this place out.  Literally hundreds of bottle selections as well as a few dozen drafts.  Unreal.  Oh and if you come hungry, they do not serve food here but do allow you to order in/bring your own.  I hear there's a popular pizza joint nearby that makes several trips to Beerhead every night.

Saturday 5/14:  Not a performance, but worth mentioning.  I'll be helping with sound and other activities at the Musical Medicine event at Zelienople's amphitheater in the park.  This is a great FREE event to highlight the healing power of music.  Lots of activities for the whole family.

Saturday 5/21:  Venture Outdoors Festival.  I'll again be running sound and performing along with other members of the Pittsburgh Songwriters Circle.  This is an all day event to highlight the various activities offered by Venture Outdoors (these are the folks that rent the yellow kayaks down on the river).  Lots of activities for all ages at this FREE event.

That's it for now!  I'll keep posting the dates as I book them.  As always thanks for your support!